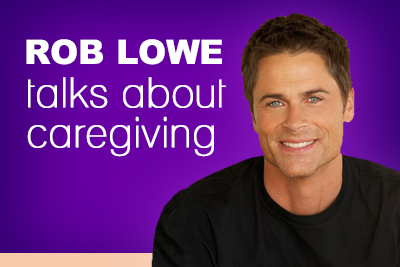 Did you know that over 40 million Americans are unpaid caregivers, and about 1/3 of them do it alone? Although he was not alone, Rob Lowe and his brothers are part of the 40 million Americans who have had to suddenly put their life on hold and care for their mother. He shares with USA Today his story and experience with caregiving.

Earlier in life, Lowe watched his stepmother take care of his dad while he battled lymphoma, and a decade later, Lowe’s mother was diagnosed with stage 4 breast cancer. Like many others, Lowe was not prepared to take on this role. When she was diagnosed, the Lowe brothers took on the responsibility of managing their mother’s schedules, medication and house work.

“It’s not a role I was expecting to land, it didn’t come with much preparation, but it turned out to be one of the most rewarding things I’ve ever done — and, undeniably, one of the most difficult.”

MetLife recently reported that caregivers are sacrificing an average of $3 trillion a year in lost wages including pensions and Social Security benefits when taking on the role to care for somebody. About 1/2 of unpaid caregivers suffer from health complications such as depression (49%) and trouble sleeping (57%).

Lowe has teamed up with Embracing Carers to help raise awareness of the challenges caregivers face. “What I’ve learned along the way is that many caregivers don’t feel supported, they don’t know where to turn for help, and they often suffer stress-related health problems of their own.” Even though the Lowe brothers were lucky enough to have the support they needed, not all caregivers do. So what does Lowe say about finding the support you need?

Ask for help. The internet is full with online caregiving support groups and forums to be apart of to help combat the feeling of being alone.

Talk to your family, coworkers and friends about caregiving. Be open and bring awareness to those around you about the reality of caregiving and what they can do to help out if/when you need it.

Be present. As tough and draining as caregiving can be, make sure to always be in the moment. Life goes on and when you are no longer needed to provide care, you can look back on the experience and know that you did your best and they weren't alone in their time of need.