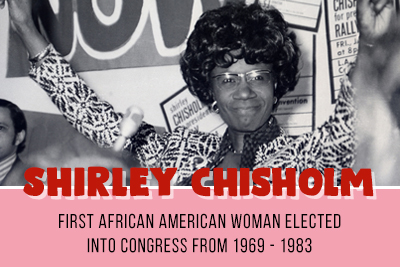 February is Black History Month and today we are highlighting Shirley Chisholm, the first African American woman elected into Congress.

After graduating from Brooklyn College, Chisholm began her career as a teacher and went on to earn a master's degree in elementary education from Columbia University. From there, Chisholm worked as the director of different child care centers and having this position of a director is where she gained her interest in politics and the community.

Aware of the racial and gender inequality surrounding her, Chisholm achieved something that many of her school professors told her she couldn’t — run for a position in the government and win. In 1964 she won her seat in the House of Representatives, representing New York's 12th congressional district, where she held her position for seven terms. During her time in Congress, she helped to improve the community around her. She supported funding for education, health care and social services.

Chisholm joined the Congressional Black Caucus in 1971 as one of its founding members and in the same year, she also co-founded the National Women's Political Caucus.

Dispute the controversy of her being a woman AND a women of color, in 1972, Shirley announced her run for president, making her the first African American major-party candidate to run. Unfortunately, her campaign didn’t gather a lot of support from the community and she had to back down from the race. After her long career as a political figure, Shirley continued her work in education. Chisholm taught classes in politics and sociology at Mount Holyoke. She retired in 1991 and moved to Florida where she passed away in 2005.

Shirley has a profound amount of achievements under her belt. In 1993 she was inducted into the National Woman’s Hall of Fame, an organization who recognizes the changes an individual has made on the social, economic or cultural aspects of society. In January, 2014, a postage stamp was created in her honor and in 2015, President Obama awarded her the Presidential Medal of Freedom. There is even a hall floor at Mount Holyoke College named after her where African American’s can choose to live while attending school.

“I want to be remembered as a woman…who dared to be a catalyst of change.”