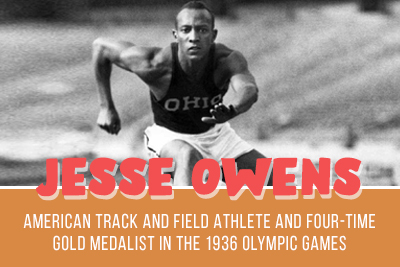 Jesse Owens was a track and field athlete and a 4-time gold medalist in the 1936 Olympics.

Born on September 12, 1913 in Alabama, Owens was one of 10 children. When he was 9 years old, Owens and his family left the South and escaped to the North to Ohio, looking for better opportunities for the family. After moving to Ohio, he worked a few odd jobs to help support his family while he was a young child and during this time in his life is when he discovered his love for running.

While attending East Technical High School, Owens came to national attention when he equaled the world record of 9.4 seconds in the 100-yard dash and long-jumped 24 feet and 9.5 inches at the 1933 National High School Championship in Chicago.

After finishing high school, he went on and attended Ohio State University. Despite his athletic ability, Owens was denied housing and was asked to order take out from “blacks only” restaurants when traveling with the track and field team. Ohio State University also denied him an athletic scholarship because of his ethnicity, forcing him to work while attending school.

One of his biggest accomplishments that year was setting the record for the long jump. He jumped a total of 26ft 8in and kept this record for 25 years until it was broken in the 1960 Olympics by Irvin Roberson.

The 1936 Olympics took place in Berlin, Germany. There, Owens won 4 gold medals and broke 2 records. Although he was one of the athletes to help win for the US, he did not receive the recognition that he should have or normally would have if he were white. Typically the President meets with Olympians to congratulate them and President Franklin D. Roosevelt chose to not meet with him. Racism was still prevalent in the US and because of that Owens was denied making appearances in sporting events, making finding work difficult for him.

Following the 1936 Olympics, Owens retired from athletics and started to earn money for his physical talents. He raced against cars and horses, and, for a time, played with the Harlem Globetrotters. Owens eventually found his calling in public relations. He set up a business for himself in Chicago, Illinois, and traveled frequently around the country to speak at conventions.

Owens was inducted into the Alabama Hall of Fame in 1970 and in 1976, President Gerald Ford awarded him the Presidential Medal of Freedom, 4 years before his death in 1980. Since his death, a street and a school have been named after him in Berlin, 2 US postage stamps have been issued in his honor, and a memorial park has been opened in Alabama. In 1990, President George H. W. Bush posthumously awarded Owens the Congressional Gold Medal.

To celebrate the success of Jesse Owens, the US Track and Field team wore pages with “JO” during the 2009 World Athletic Championships in Berlin.