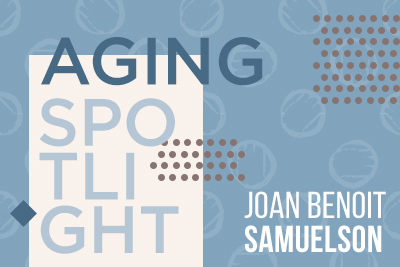 Running has always been a passion for Joan Benoit Samuelson, and she has been a huge inspiration for runners nationwide.

Benoit's success began in 1979, when she competed in the Boston Marathon and won. Four years later in 1983, she competed again and beat her original record time; and in 1984, she won the gold medal in the first women’s Olympic Games marathon in Los Angeles. Benoit also held the record for the fastest time for an American woman at them Chicago Marathon for 32 years after winning the race in 1985.

Her success doesn't end there. 40 years later in 2019, at the age of 61, Benoit took her skills back to where it all started and competed in the Boston Marathon again, where she finished within 40 minutes of her winning time in 1979. “I don't have any secrets, I’m just passionate about what I do. I love to run…I love to set goals for myself,” says Samuelson in a recent interview with Growing Bolder. “If people can grab onto that and be inspired, then great!”

Running hasn’t just been a passion of her past, at the age of 50, Benoit set a record at 50 at the US Olympic trials. When asked what advice she has when it comes to getting older and continuing to do what she loves, she said “Look forward. Live each day like its your last.”

“Life has a beginning and an end and there’s no finish line right now in my life, and when its there it’s there.”