It may surprise you to learn that stairlifts can be dated all the way back to the 16th century. This blog looks at the history of stairlifts in the home, who invented them, and how they have evolved.

Did you know many people believe that stairlifts are a modern-day invention? However, this is incorrect information, and the stairlift has been around for many decades. However, it may surprise you to learn that stairlifts can be dated all the way back to the 16th century. While the stairlifts you see today boast innovative technology. Despite society’s assumption, the very first stairlift was invented a long time ago. This created a solution for individuals who may deem a simple task as climbing the stairs very challenging. Yet, with state-of-the-art technology, these same people can find much comfort in the form of stairlifts. This can assist you or your loved ones in overcoming the fear and risk of falling downstairs. Let’s take a look at the history of stairlifts in the home, who invented them, and how they have evolved.

The invention of the Stairlift

As far-fetched as the idea might be, in the late sixteenth century, none other than the infamous Henry VIII can be tied to the stairlift history. The earliest recorded stairlift was invented for King Henry VIII of England in the mid-1500s. After being injured in a jousting incident, he commissioned a “chair throne” to go up and down the 20 feet of his London home's steps. The world’s first stairlift was constructed to where servants pull ropes to move the chair up or down. The throne was made out of a block and tackle system. King  Henry was also known to own several primal wheelchairs to help him move around his palace. 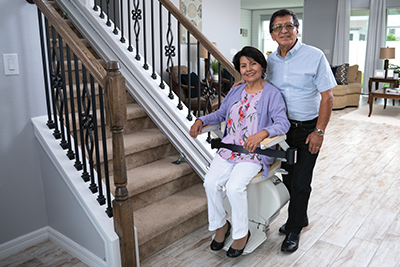 Introduction to the Commercial Stairlift

In 1923, the precursor to the modern stairlift was invented by C.C. Crispen, a Pennsylvania entrepreneur. He then opted to draw up plans for a folding wooden chair that included a footrest. It was created to move with the aid of rollers up and down a steel bar that was attached to the stairs. This would enable his friend to come downstairs without needing the help of a caregiver. Crispen had a friend who happened to have trouble getting between two floors in his house due to his polio illness. This sparked the self-taught engineer to enhance a basic chair by connecting it to a rail that went the staircase's length. This mechanism was running on small wheels or and usually moved by a chain or a cable. Crispen built his prototype, and it took a year to fully develop before being displayed for the first time in a showroom in 1924.

The Future of Stairlifts

Though the basic mechanism has improved over the years, the modern-day domestic stairlifts are even more comfortable. Some of the earliest models are still featured in many of the designs today. A prime example of this would be chair pivoting at the top of the steps or increasing the folding ability degrees. Of course, just as with every technology, countless improvements and innovations have been made over the years. Installations are easier; more safety features are built into some models, ease of use continues to improve, and more. For instance, once your stairlift is fitted, our engineer will put it through a thorough testing procedure designed to ensure everything is working just as it should be.  Our stairlift is thoroughly checked with every component for optimum performance. We specialize in not only straight, curved but we design for outdoor use. There are always differences from manufacturer to manufacturer when it comes to who has the most expertise in this market. Unlike some stairlift companies, we have improved on the original concept by including various stairlift features that help regain your independence.